If you’ve ever been lucky enough to live in a home with glass shower doors that were easy to keep clean, you may also know that it can be tricky when you move to a new place and you have to leave them behind. Especially if that place calls for a shower curtain or two. You can’t spray it down and wipe it clean in the same way, and you have to change out that shower liner on a regular basis. Not to mention, you may be overwhelmed by the wide variety of shower curtain designs available. And the difficulty of finding interesting or understated modern selections in the mix. 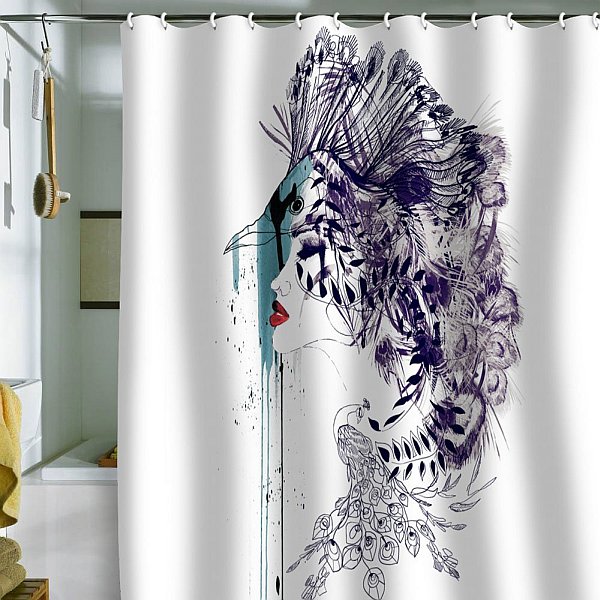 In the spirit of contemporary design, today we at Decoist round up the best shower curtains available online. Yes, sleek modern design is possible, even if you’re on a budget. Whether you’re wanting a subtle piece that will allow the other elements of your powder room to take center stage or you’re searching for a showstopper that can be the interesting focal point of your space, there’s something here for you in the images below! Enjoy browsing…

We begin with a series of solid shower curtains that put a subtle yet powerful stamp on your bathroom. Like the Stonewashed Belgian Linen Shower Curtain from Restoration Hardware, which is soothing with its cool shade of blue. Imagine this piece in an all-white space, or perhaps a pale gray one, as shown in the image below…

For a bit of texture, try the Diamond Matelassé Shower Curtain, also from Restoration Hardware. Available in a range of hues (all understated yet classy), this shower curtain is unique in its diamond-stitching:

Sometimes all you need is a touch of linen. Thank goodness for selections like the Linen Shower Curtain from Zara Home, which adds the softest hint of beige while celebrating the beloved look of linen. Again, this piece would add a bit of color to a white bathroom, or it would keep things from getting out of hand in an ultra-colorful space:

Sometimes it’s all about the border. That’s what you get with our next set of shower curtains, which boast frames within the fabric. And these elegant bands lend a hotel-style look to your space that is crisp and clean. Check out the Pearl Embroidered Shower Curtain from Pottery Barn, which features embroidery in a range of colors from lilac to taupe…

Or the Grand Embroidered Shower Curtain, which creates a clean, well-defined look. The satin-stitched embroidery is also available in a variety of subtle yet strong colors.

If you’re searching for a bold outline that adds contrast and style, check out the Morgan Shower Curtain from Pottery Barn. Doesn’t this piece look great when combined with special powder room touches like apothecary jars and sea sponges? Not to mention, the classy contrast between the white background and the thick band creates a spa-like effect. Wouldn’t you know that the border of this piece is also available in several colors?…

Finally, the Italian Hotel Satin Stitch Shower Curtain from Restoration Hardware has a double band that can’t help but create a powerful outline. Crisp, clean and lovely, don’t you think?…

We now turn our attention to nautical stripes. Thick horizontal stripes that evoke the relaxation and style of a day at the beach. We begin with the Stripe Shower Curtain in Dusty Navy from West Elm. A clean look and a pure cotton fabric make this piece ideal for white spaces, such as the subway tile-covered bathroom below.

With the look of a beach towel or a summer poolside cabana, the Stripe Shower Curtain in Citron from West Elm never goes out of style. Pair it with modern or vintage touches, but don’t forget the nautical accents (such as the plush sea sponge pictured in the next image)…

You’ve gotta hand it to West Elm. They certainly know how to create a great product and offer it in every possible stylish variation. For a look that’s more modern than nautical, check out the sleek vibe of the Stripe Shower Curtain in Feather Gray. The richness of the gray makes it perfect for powder rooms with a neutral yet powerful palette, such as the taupe space below.

From stripes to patterns… We now turn our attention to a variety of prints that add a statement to your bathroom space. Like this bird-motif shower curtain from H&M Home, which is colorful and playful. And you’ll love its water-repellent polyester construction, as well as the way the piece adds a feminine yet modern touch to any space!

For a touch of tile-like geometry, check out this patterned shower curtain from H&M Home. We’re loving the way this print is interesting with a look that can range from vintage to modern:

We also admire the organic style of this Modern Blossom Shower Curtain, which covers its white surface with a pattern of contemporary branches in a shade of gray. Note the bath mat and towel in the reversed version of the pattern.

Ready for a little bit of ikat style? After all, why should ikat be confined to bedding, throw pillows and rugs? This Tali Printed Shower Curtain from West Elm features an African-inspired pattern in shades of feather gray and citron:

Or add some vintage merit badge style with this Scout Shower Curtain from West Elm, which can’t help but wow with its emblem look and standout pattern. Plus it’s water and mold resistant!

You may have seen this next selection before. After all, it’s a beloved contemporary favorite. Yes, it’s the Thomaspaul Octopus Shower Curtain, which features a cephalopod with outstretched tentacles that evoke the feel of a botanical print. But one that envelopes the entire room! This piece is available at a variety of retail destinations, such as 2Modern [image via WM Events]

We end with an equally unforgettable shower curtain pattern–a New Your City subway map! This stunner from Izola Shower is simple and sophisticated, yet cheeky. Which is the perfect way to create a focal point for your modern bathroom! [image via Houzz]

Which shower curtains above caught your eye? Is there a selection that inspires a bathroom makeover for your home? Share your thoughts by leaving a comment below…